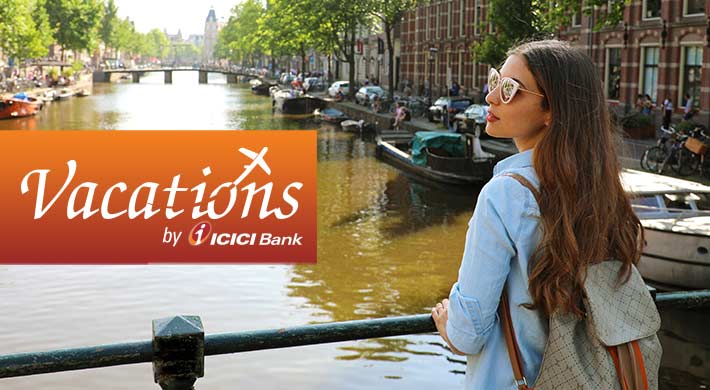 We have mother Earth to thank for her beautiful natural wonders. The seasonal change in the Earth’s climate and the annual passage of winter, spring, summer, autumn is widely awaited by everyone the world over. April 22 is Earth Day and a great time to thank Mother Earth for all the natural wonders that we love. The tulip blooming season in Netherlands is one spectacular season. Standing amongst rows of coloured tulips, one can’t help but praise planet Earth to create such magic year after year.

In the 17th century, there was a ‘Tulip Mania’ in Netherlands. While the financial flurry around Tulip may have withered away, it still remains one of the major exports from Netherlands and one of the prettiest flower cultivation sights in the world. The Tulips start blooming around late March, early April and you can partake their beauty till about mid-April. We take you to Keukenhoff in Netherlands to treat your eyes to this colourful spectacle. While you are in Netherlands, there are plenty of other things to enjoy – including their Kings Day celebrations and their meticulously curated systems of canals and windmills. To carry on the nostalgia of boats and windmills, we have a handy guide on how to use train passes for a memorable trip.

Soul Trip: Get closer to Nature

It is the break of monotony that travel offers which makes it exciting after spending days and nights in the city going through our daily lives.

Our Earth is a beautiful planet with millions of natural wonders scattered all over the world. We must make a special effort to see these natural seasonal wonders. While some of these events are annual, some like the Geysir eruptions that take place on a daily basis. April 22 is Earth Day and to mark this day, we are giving the following most breath-taking natural features of our planet: To get a sample itinerary (7 Days) for Netherlands, Click Here

Netherlands is a small country in Europe but its influence on the world history is very big because of the Dutch explorers who went far and wide looking for new lands and establishing trade routes. Many people use the names Holland and Netherlands interchangeably, but actually there are only two provinces – Noord Holland (North) and Zuid-Holland (South) which are called Holland. These two provinces contain the most important cities of Amsterdam, Rotterdam, Hague, Delft, Leiden and Haarlem. The origin of the word Netherlands is in its geographic uniqueness which is actually a defining feature as well. Europeans gave the name Netherlands because it started out as a union of the seven low-lying provinces in their fight for independence from the Spanish/ Habsburg Empire. The highest point in the European Netherlands is only 300 metres above the sea level, and most of the country is actually below sea level. Now you may say how can a place be below sea level but that is where their engineering marvels of windmills, canals, dykes and polders come in. You have to see it to believe it. Also, Netherlands is one of the flattest countries in Europe as far as the terrain goes. Because of this, use of cycling to travel short and long distances is extremely popular in Netherlands. In fact, it is because of these two geographical features that windmills and cycles have come to signify Netherlands. Spring is the best time to visit to marvel at the colourful carpet like fields of Tulips which only last 6 – 8 weeks. The awe-inspiring colours of the flowering tulip bulbs are a typical sight all over Holland during the months of April to June. The bright red, pink and yellow colours are overwhelmingly beautiful and are a must see. Start your trip in Amsterdam which is close to most Tulip fields. Best place to witness the glory of tulips is Keukenhoff, a 32-hectare park where over 6 million tulips bloom together. In April, they organise a flower parade as well.

Couple your trip by enjoying the biggest street party (or should we say Canals party) in Netherlands i.e. King’s Day. Celebrated annually to honour King Willem Alexander, this is the time when everybody comes out of their houses in their orange finest for street side revelry. While in Amsterdam, don’t miss tours of its famous museums and boat tours in its seemingly never ending canals. For this summer vacation, Netherlands will be a treat for your eyes and for your wandering soul.

The charm of train travel

In today’s era of jet-setting and covering large distances in the blink of an eye, a train journey holds a different charm. Not only do many people associate it with nostalgia but also train journeys are a great way to experience slow travel (when you are not in the likes of superfast Shinkansen of Japan or TGV of France). Trains also provide a view so spectacular that the journey itself becomes a memorable feature of the trip. Some iconic routes like Cusco – Machu Picchu or through the glaciers of Switzerland have full glass top cabins in the train for appreciating the natural beauty as you pass by. Furthermore, some train companies around the world have introduced the concept of train passes which is largely available to tourists only to make use of their wide rail network in a cost-effective manner. The first rail pass was issued as the Eurail pass in March 1959. Owing to its success, lots of other passes have been issued by various railway companies all around the world since then. Very often, these rail passes cannot be used by the local citizens and might not even be available for purchase within their area of use. So, if you are planning a visit to any large land masses, be sure to check the train options to fully partake the natural beauty of that place.

There are two ways of counting the valid period of a rail pass. A continuous pass counts the days or months continuously. For example, a 15-day pass is valid for 15 continuous calendar days starting from the day of validation and a one-month pass is valid for a calendar month. As continuous pass might not be useful to all travellers, as lots of them do not travel everyday, there exists also the flexi pass, which allows the holder to only pay for the days they travel.

Sometimes, if the train passes through areas where the pass is not valid, travellers need to pay for that section of the route. For example, if one gets a pass that is valid in Spain and Italy, and would like to take a train from Spain to Italy passing through France, he may need to pay for the French section.

These train passes turn out to be economical for the amount of travel they offer and are an experience in itself. Whenever you are considering trips to Japan, Europe, Australia, Korea etc, do check out their rail passes. Some of the more popular train passes are given below:

News you can use

Events, festivals around the world and key announcements: ‘Vacations’ is powered by OneShoe Trust for Responsible & Mindful Travels – a travel events and marketing social enterprise that promotes travelling as a means to raise awareness about climate change and preserving local ecology.

Any use of the information in the e-mailer/ blog/ website is at user’s own risk. Nothing contained herein shall constitute or be deemed to constitute an advice, invitation or solicitation to purchase any products/ services of ICICI Bank and shall not be relied upon as such. ICICI Bank shall not have any liability towards any third party for any loss or damage incurred as a result of use of the content or reliance on any information provided hereunder. Terms and Conditions of ICICI Bank and third parties apply. ICICI Bank is not responsible for third party products, goods, services and offers.

Get social with us.

People who read this also read