All of humanity originated in Africa. In the journal ‘Nature’, three separate teams of geneticists surveyed DNA collected from populations around the globe and concluded that the modern non-Africans can trace their ancestry back to a single population emerging from Africa between 50,000 and 80,000 years ago.

On a jungle safari in Kenya/Tanzania/Uganda/Congo/South Africa the first thing you’d notice is the vast, empty landscape and the starkness of it all, a brown land stretching for miles with perhaps a lone tree somewhere. Vistas like these evoke a certain feeling of melancholy at first but as you spend your days in this vastness, the respite, the connection will whisper back to you, “it all really started in Africa”.

A ‘tower’ of giraffes, a large ‘memory’ of elephants, prides of lions, hordes of wildebeests fill up the entire terrains, migrating from one end of the reserve to the other. More than one million wildebeest and 200,000 zebras participate in the migration across the Mara River. It feels so incredible to see so many animals in one place.

Soul Trip : Nature at its purest 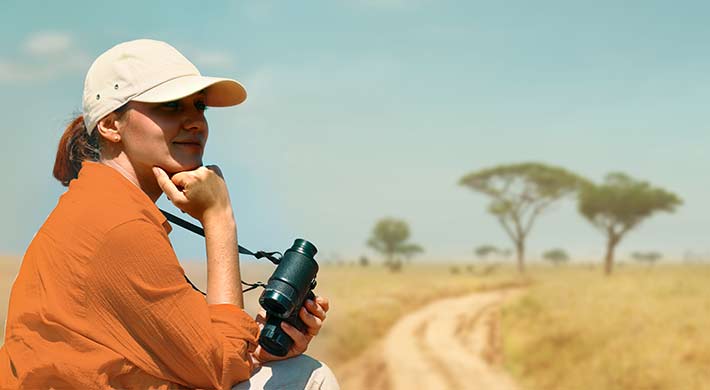 Africa is often nicknamed the ‘Mother Continent’ for being the oldest inhabited continent on Earth. Human ancestors have lived in Africa for more than 5 million years in close quarters with a wide variety of animals and birds. The big 5 of Africa: elephants, lions, leopards, rhinos and African buffalos are some of the fiercest animals on our planet and to see them in their natural habitat is an unmatched thrill.

Passing through the wilderness of Kenya, it’s easy to be overcome by the sheer awe of being in the midst of these magnificent beasts, the mighty indigenous, a star studded night sky, the gushing sounds of river Mara or a howling jackal (one of the most ancient species living in Maasai) or birds splattering near a watering hole. In a lot of ways, the forest reserves of Kenya represent where we come from, all that we have left far behind and our most primal of connections.

A jungle safari through Kenya is a rare experience, close to how it was before civilization. We’re truly fortunate to have some of these pristine places left on Earth, protected and constantly reminding us of our ties to this land, the trees and to the clean air. 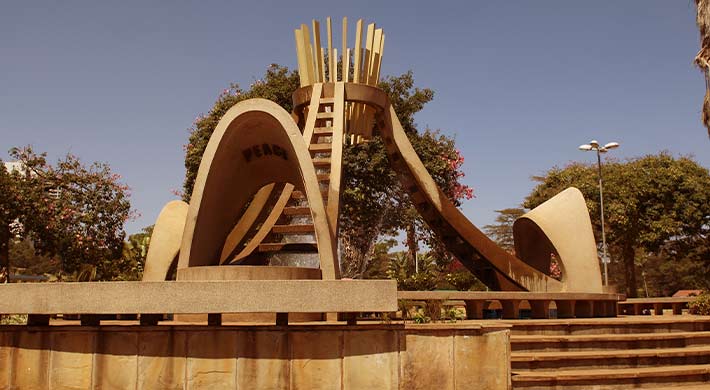 Kenya – The old and the new

To get a sample itinerary for Kenya, Click here.

Kenya is one of the oldest inhabited regions on this planet but a young independent nation. It is one of the most powerful economies of East Africa and has a thriving middle class. Still a developing country, its society and infrastructure may surprise visitors from developed nations. Socio-economic inequalities indicate that many middle to upper class Kenyans live moderately affluent lives while the low income groups inhabit slums.

Kenya lies on the Equator with the Equatorial line running through its elite resort Fairmont Mount Kenya Safari Club. Other places will also let you prop one leg in the Northern Hemisphere and the another in the Southern. However, Kenya has a tropical climate - hot and humid at the coast, temperate inland and very dry in the north and northeast parts.

Kenya receives a great deal of sunshine but it’s cool at night and early in the morning. Also, because Nairobi and many highland towns are at a higher altitude, it can be quite cold even during the day between June and August, with temperatures dropping to a single digit (Celsius). The long rainy season features April, May and June. The short rainy season lasts from October to December. The rainfall is sometimes heavy and it often pours in the afternoons and evenings. The hottest period is from February to March and the coldest from July to August.

Modern-day Kenya emerged from a protectorate established by the British Empire in 1895 and the subsequent Kenya Colony in 1920. Kenya got independence in 1963. A new constitution and government were adopted in 2010 to replace the old constitution. Kenya was a part of both World War 1 and 2 and its people were exploited as cheap labour by its colonisers. A large population of Indians were also taken to Kenya for war, trade and logistics work.

During the 20th century, many interior central highlands were colonised by the British and by wealthy European farmers, farming coffee and tea. In 1952, Princess Elizabeth and Prince Philip were in fact at the Treetops Hotel in Kenya, when her father, King George VI died in his sleep. Elizabeth cut her trip short and returned home immediately to assume the throne. She was crowned Queen Elizabeth II at Westminster Abbey in 1953.

Kenya has some of the world's best game reserves with the finest African flora and fauna. The parks are famous for lions, giraffes, elephants, herds of zebras, wildebeests and buffaloes. The annual wildebeest migration (from Maasai Mara to the Serengeti) is an awesome sight and best experienced in a hot air balloon. Kenya is also a great destination for beach holidays, the city of Mombasa being a popular choice. Kenya is fast emerging as a golf holiday destination as well with an abundance of beautiful courses around the major urban areas.

Tourism in Kenya is the second-largest source of foreign exchange revenue following agriculture. The main attractions are the jungle safaris through the 60 national parks and game reserves. Other attractions include the wildebeest migration at Masaai Mara, the 7th wonder of the world; historical mosques, colonial-era forts at Mombasa, Malindi and Lamu; the white-capped Mount Kenya and the Great Rift Valley; tea plantations at Kericho; coffee plantations at Thika; a splendid view of Mount Kilimanjaro across the border into Tanzania and the beaches along the Swahili Coast in the Indian Ocean.

Currently, Kenya is catching some of the big post-Covid travel trends and a spike in conferences and events. During the WRC 2022 Safari Rally between June 23 and June 26, 2022, hotels were scarce in Nairobi and the Naivasha area. So if you decide to pay a visit to the majestic cats of Maasai, be sure to find a good travel operator who will fix everything for you.

It may be difficult to coordinate itineraries on your own or on a self-drive mode. That is because the itinerary normally runs from one part of the protected forest reserve to another and only locals know the routes, regulations and other modalities comprehensively. On a typical day, you will leave your jungle lodge after breakfast, be in the jeep the whole day with a packed lunch and return to the lodge in the evening. From very high end to barebones facilities, both kinds of lodges are available. So check out one of our sample itineraries and start planning for your dream jungle safari experience. 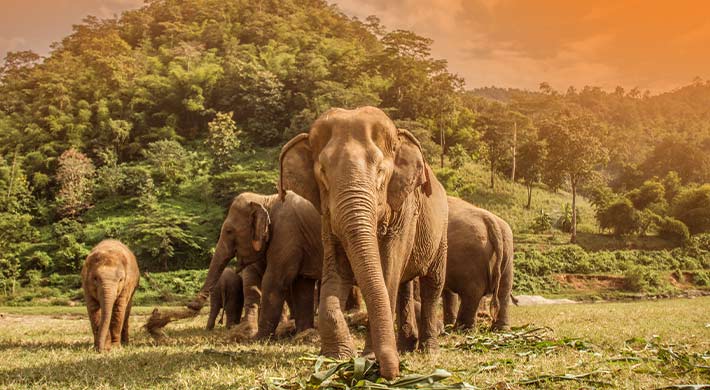 *Please confirm all event dates and venues before booking.

COVID UPDATE: At the time of writing, the following protocol is being followed for international arrivals into Kenya: All fully vaccinated passengers travelling to Kenya are not required to take a pre‑departure COVID‑19 PCR test.  All eligible unvaccinated travellers except children below 5 years of age must have a valid negative COVID‑19 PCR test certificate for a test taken within 72 hours before departure. Eligible unvaccinated travellers except children below 5 years of age are subject to rapid antigen testing on arrival at their own cost of USD 30 USD. Travellers who test positive on arrival are subject to PCR testing at their own cost of USD 50 and must self‑isolate. Printed COVID-19 test results and vaccination certificates will not be accepted on arrival in Kenya. Passengers must upload their documents on Global Haven before check in. For any latest update, please check your airlines’ site or kcaa.or.ke website. 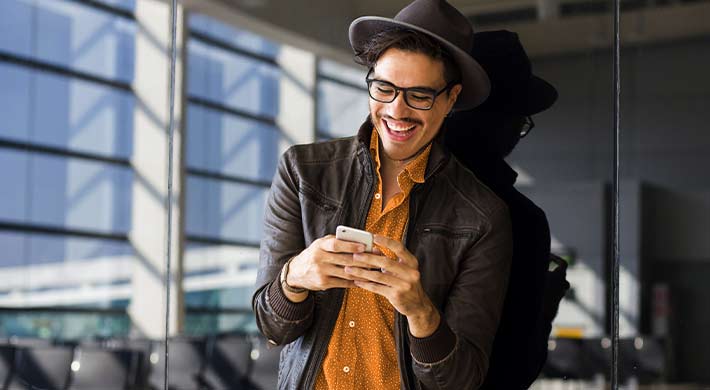 In our last issue, we had covered Tripwhistle, Tripit, Roadtripper, Google Maps and Flio. In part 2 of the series, we bring you more travel apps that make travel easy:

1. Flightradar24: With the Flightradar24 app, keep an eye on not just your own flight but any flight taking off from anywhere in the world, currently in the sky or landing anywhere on earth. Keep track of flight delays, cancellations, gate changes and diversions, so you're always aware of what's going on. You could also see average performance of a particular flight regarding on-time arrivals. This is not an official app of any particular airline or airport so always check for your flight with the official source as well.

2. Google Photos: Almost everyone has used Google Photos, specially all the Android users. If you haven’t, please download to experience its powerful features and if you already have, ensure that you are using all its features for a superior photo storage and sharing experience. You can free up your phone storage by taking a backup of all pictures and videos, create animations, do basic edits, search all stored photos by the name of location or person and share albums with other people.

3. Packpoint: If we know a few details of the destination beforehand, we can pack better and lighter. Answer a few simple questions about your trip and PackPoint will create a customisable packing list for you, including recommendations based on weather forecasts, activities and whether or not you'll have access to laundry facilities. It's easy to cross things off as they're packed or add more as you go along.

4. XE Currency Converter: XE is now the go-to currency exchange rate checking platform for millions of people, the world over. While you will almost never get the exact rate of conversion that XE shows as that is an interbank rate in most cases, it will give you a very good idea of how much more you’re paying. It allows you to keep track of the ever-changing rates, including the option to track up to 20 currencies with alerts and notifications.

5. Airbnb : Lastly there is Airbnb, an un-hotel app. If you too are tired of staying in cut-and-dried hotel rooms, try staying in local people’s apartments when you travel. When Airbnb started, you could actually rent a room in other people’s houses too. You get your own living quarters mostly with cooking facilities so you save on dining out. Some Airbnb’s are really fancy situated in very swanky areas.

In your next vacation, try one of these apps depending on what features you are looking for and watch your vacation become smoother. For more super-useful apps, don’t forget to read our upcoming issues.

Sustainable Travel Tip of the Month 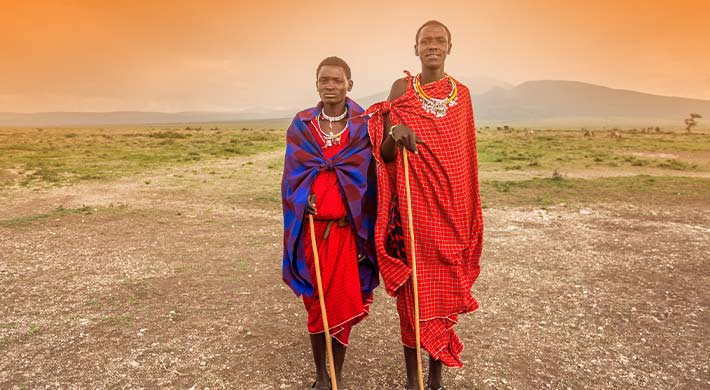 Let’s all be responsible travellers

Although foreign visitors are now a common sight in many parts of Kenya, there still exist vast areas off the beaten track where a foreign face can still be an odd sight. Visitors to these areas should be mindful about the long term effects of their visit on the local community and should for example avoid giving out sweets or money without restraint. Playing with children or talking to and helping villagers will yield far better results than giving handouts.

Consider volunteering at a local school to talk about your country or to teach Maths or English. To make your work more meaningful, consider staying there for a longer period rather than just a 30-minute visit.

Get an Amazon Pay Gift card worth Rs. 1,500 on loading your card with minimum of USD 1,500 (or equivalent in other currency). Limited period offer. Click here for more details.

‘Vacations’ is powered by OneShoe Trust for Responsible and Mindful Travels – a social enterprise that promotes travelling as a means to raise awareness about climate change and environmental issues. Incubated at IIM Bangalore, OneShoe is the source of most authentic travel experiences around the world.

Get social with us.